At that time, we expressed “cautious optimism” that the January 2019 subject matter guidance, and the two prong-test therein, might bring some consistency to patent eligibility questions, but that it was too early to tell whether and how much the rejection numbers will change. [3].

Eighteen months later, available data suggests that the 2019 subject matter guidance has had a pro-patent effect. In April, the Office of the Chief Economist (OCE) at the USPTO released a report entitled “Adjusting to Alice: USPTO patent examination outcomes after Alice Corp. v. CLS Bank International.” [4]. Two figures from the report tell much of the story. As seen in Figure 1 of the report, reproduced below, immediately prior to the Supreme Court’s decision in Alice, approximately 20% of first office actions in “Alice-affected technologies” (such as software) included a Section 101 rejection, whereas approximately 5% of first office actions in other technologies included such a rejection. Immediately after the Alice decision, nearly 30% of first office actions included section 101 rejections in Alice-affected technologies, while other technologies remained the same. 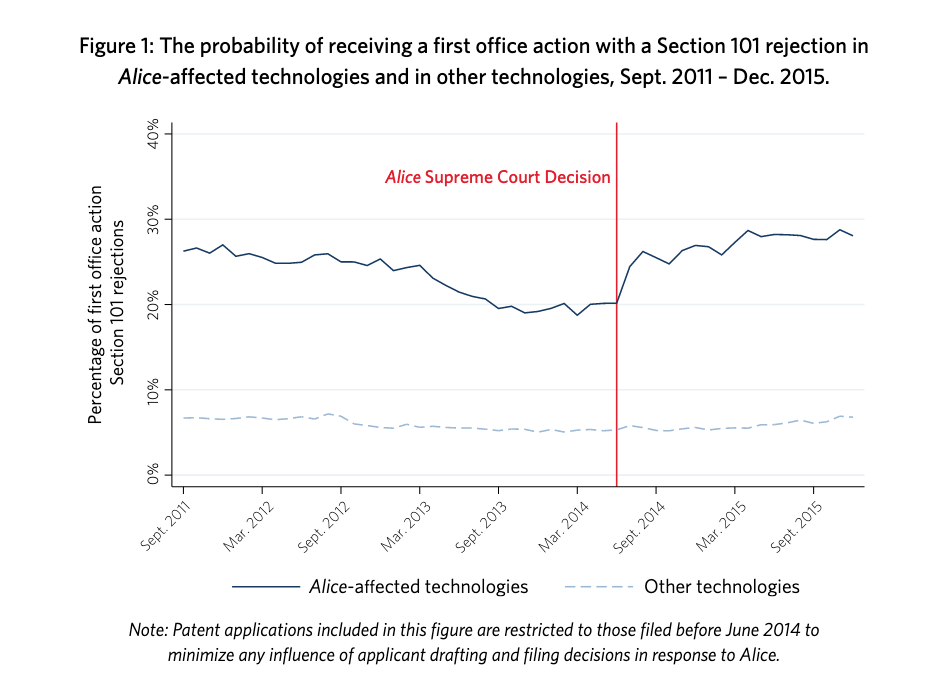 Figure 3 of the OCE Report (reproduced below) shows more recent data, including prior to and after the passage of the 2019 subject matter guidance. Figure 3 also shows that for Alice-affected technologies, Section 101 rejections actually increased to a peak in late Spring 2018, when over one-third of first office actions included a Section 101 rejection. 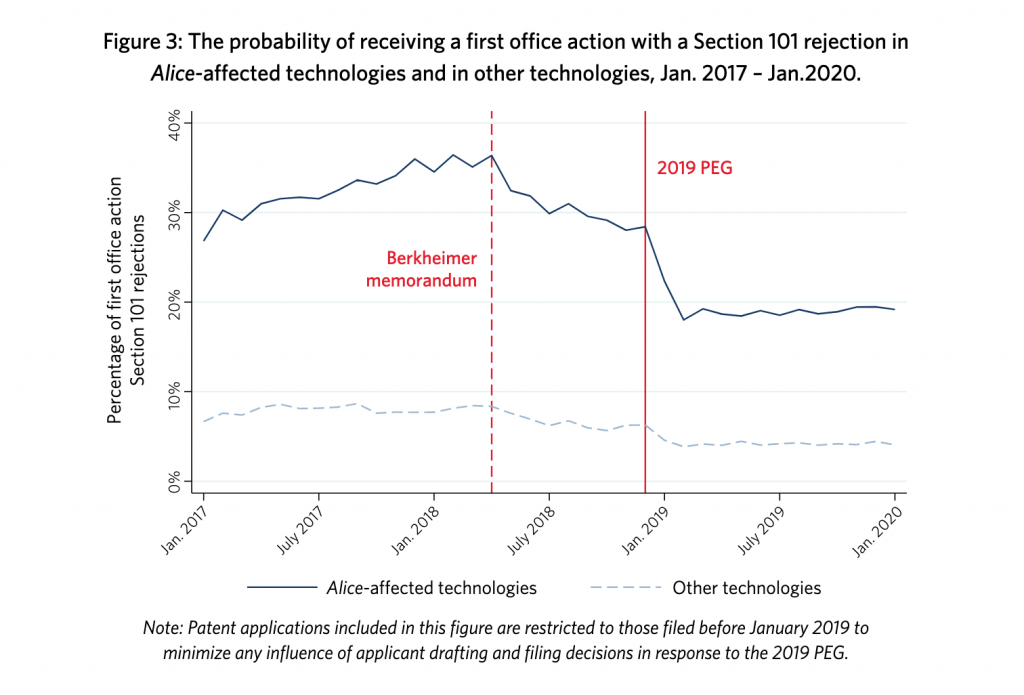 As seen in the Figure, two significant events occurred, each operating to reduce significantly Section 101 rejections in the Alice-affected technologies. First came the release of the Berkheimer memorandum, which included new guidance that required examiners to make a factual determination as to whether claim elements were common and routinely used. Prior to Berkheimer, examiners could conclude (without making a factual determination) that an element (or combination of elements) was a well-understood, routine, conventional activity that was widely prevalent or in common use in the relevant industry. Requiring that an actual factual determination be made had the effect of making supporting such conclusions more difficult for examiners, thus lowering rejection rates. Second, the 2019 subject matter guidance caused an even more substantial drop in rejection rates, in part due to the added structure and clarity that the guidance offered. Combined, these two events returned first office actions with Section 101 rejections for both Alice-affected technologies and other technologies to their pre-Alice numbers.

Our blog post from last year also discussed concern that the USPTO guidance might not be approved or adopted by higher courts, who may find the identified groupings too rigid. Indeed, a recent case from the Court of Appeals for the Federal Circuit, Ericsson Inc. v. TCL Communications5, demonstrates the degree to which the USPTO and the Federal Circuit may reach different conclusions. Claim 1 of the patent at issue in Ericsson recites:

Over a vigorous dissent from Judge Newman, the panel of the Federal Circuit concluded that Claim 1 was directed to the abstract idea of controlling access to, or limiting permission to, resources. [6] One of the two arguments made by the patent owner and rejected by the Federal Circuit panel was that the claims were not directed to a “mathematical algorithm,” “method of organizing human activity,” or “fundamental economic practice.” In other words, the patent owner drew from the exact groupings in the 2019 subject matter guidance in formulating their argument that the claims are not “directed to” an abstract idea. The Federal Circuit found, without much explanation, that this argument is legally erroneous, and noted that the Supreme Court “has explicitly rejected the use of such ‘categorical rules’ to decide patent eligibility.” [7] This would suggest that that at least some of the foundation of the 2019 subject matter guidance may be on less-than-firm ground. We note that the patent owner recently petitioned for en banc review at the Federal Circuit, and given the strength of the Newman dissent, there is a better-than-typical chance that en banc review will be granted.

What does this all mean? Our firm continues to believe that the best way to draft a patent application and/or patent claims is to remain informed as to the 35 U.S.C. § 101 decisions of the Supreme Court and Court of Appeals for the Federal Circuit, and draft applications and claims with these decisions in mind, rather than focus exclusively or primarily on the 2019 subject matter guidance. The guidance is helpful in articulating key points to an examiner or to the USPTO Patent Trial and Appeal Board; however, as seen in Ericsson it is not the sole determinant of patent eligibility. A patent eligible claim should satisfy both the guidance and accord with the relevant Federal Circuit case law; satisfying only the guidance may be insufficient. Thus, for software and computer-based inventions, we continue to recommend that attention should be given in the specification as to the technical problems (i.e., those rooted in computer technology) that are solved by the described invention, and how the solutions of the invention overcome the problems that specifically arise in the technical field.

As always, we welcome any questions you have on the Subject Matter Guidance and whether it affects your patent strategy.

2College, A. “USPTO Rings In 2019 With New Guidance for Computer-Implemented Inventions – Part I: Subject Matter Eligibility,” Feb. 28, 2019, available at https://www.myersbigel.com/uspto-rings-in-2019-with-new-guidance-for-computer-implemented-inventions-part-i-subject-matter-eligibility/.